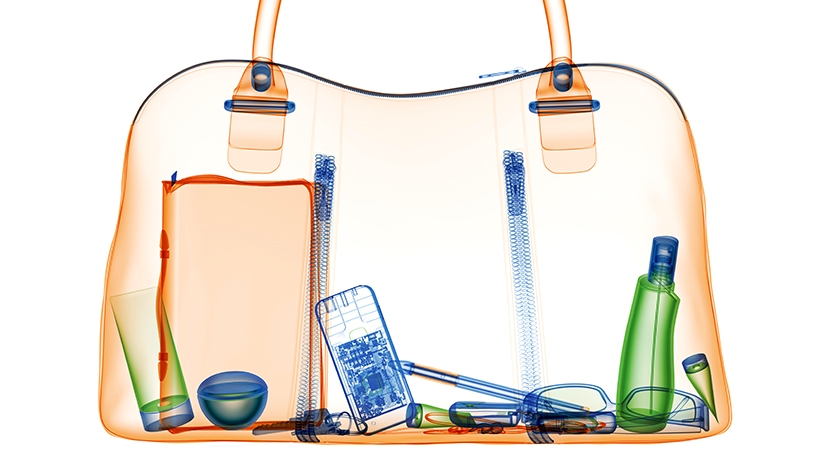 Security concerns have made air travel a pretty invasive affair, but the security process is actually designed to protect us, the passengers. It is critical to the safety of all who fly that hold luggage, hand luggage and each passenger’s physical person are all checked by scanners to ensure compliance with restrictions.

How do airport scanners work?

If you have ever wondered how airport baggage scanners work, airports use two different kinds of scanners. The first are full-body scanners known as millimetre wave scanners and create a moving image like what we are used to seeing in movies.
Backscatter X-rays are designed to show hidden objects beneath clothing or luggage. They can detect both metallic and non-metallic objects, ranging from guns to foods and plastics. Some airports no longer use backscatter scanners because they’re considered a privacy invasion, but they remain in use at major US, UK, and European airports.

Backscatter and millimetre wave scanners can achieve a detailed view of the body beneath all clothes. They remove the need for pat-downs, so many tourists prefer them to the alternatives. In the United States, travellers are allowed to choose between scans and body searches, but the UK Department for Transport doesn’t allow passengers to fly without being scanned. Scanners can detect steel and non-metallic objects on the exterior of the body.

Contrary to popular belief they cannot see inside body cavities or diagnose disease. New ATI scanners have been designed to provide passengers with more privacy by showing only a generic outline, which cannot indicate gender or body type. Other forms of scanner, however, are far more detailed (see image left).

If you’re travelling through an AIT scanner, you can relax in the knowledge that the security process will be less invasive than in the past. Your security officer will see an image akin to a paper doll. In airports still using explicit scanning, the officer viewing the image is kept in a separate room so that passenger and scanner never make direct contact.

What do airport baggage scanners see?

Baggage Scanners are explicit enough to pick up detailed images of your luggage contents, which is why so many of us wonder “what do airport baggage scanners detect?” They can detect metallic and non-metallic objects, including most organic materials. That means you might not get away with smuggling banned foods in your suitcases.

Baggage scanner machines rely on X-rays to see through the surface of your luggage to achieve detailed images of the items inside it. Security officers can calculate how dense each object is, which gives them the information they need to spot contraband. They might not be able to work out what every item in your luggage is, but if suspicious items are detected, you may be bag searched. It’s advisable to mind the rules about any banned items in carry-on and hold luggage.

Lost luggage and damaged bags – what to do

Lost luggage and damaged bags are a regular occurrence. In 2017 airlines “mishandled” 50 million bags. By 2018 that figure had dropped to 25 million, that’s nearly half a million bags a week!

Whether you’re travelling with a low-cost airline or a major airline and you suffer losses as a result of negligence or poor luggage handling, EU passenger regulations may entitle you to compensation. If your luggage is delayed Regulation (EU) No. 261/2004 will protect you.

It is extremely important to report lost or damaged bags immediately and file a Property Irregularity Report. Bags are considered “missing” up to 21 days after your flight, after which they are then considered “lost”.

As soon as possible once officially lost

The amount of compensation awarded can be up to €1,400, however this is decided on an individual basis and is often much less than the maximum possible.

More information about passenger rights and baggage problems can be found on the GIVT website.

Everything You Need To Know About Cabin Luggage

Never sure whether you will get away with your free carry on allowance, or should you pay extra for priority. On long haul flights baggage allowances are usually quite generous, but on short-haul, or budget flights choosing which size and type of luggage can be mindboggling. Index: Carry on cabin hand luggage allowances top airlines…

Can You Carry Aerosols in Checked Baggage?

Ready and eager to travel, but not sure if you can take aerosols in checked baggage? It’s not unusual for people to worry about taking their hair sprays, sun block, hair mousse and deodorants on board an airplane. Here’s what you should know about aerosol restrictions and how to answer the question: can you carry…

What is checked baggage?

If you’re wondering “What is checked luggage?” you needn’t be intimidated by the check-in process. If you arrive with a properly-weighed bag and have taken stock of restricted baggage items, checking your luggage in will take a few seconds. The differences between checked and carry-on luggage that matter most are their size, weight, and restrictions….

If you’re waiting for a connecting flight or don’t need most of your luggage during your trip to Amsterdam, you needn’t roll your bag around the city. Its storage options are surprisingly pocket-friendly. Luggage Storage Amsterdam Airport If you’re staying within the vicinity of the airport, you’ll find Schiphol’s storage lockers on the lower level…

When and where to buy suitcases for travelling by plane?

The best way to buy suitcases is when it is off travel season. Suitcases are usually most expensive just before school holidays or right before major bank holidays like Christmas and Easter. It is also not advised to purchase suitcases at the airport as they will charge higher prices to capitalise on a traveller’s last-minute…