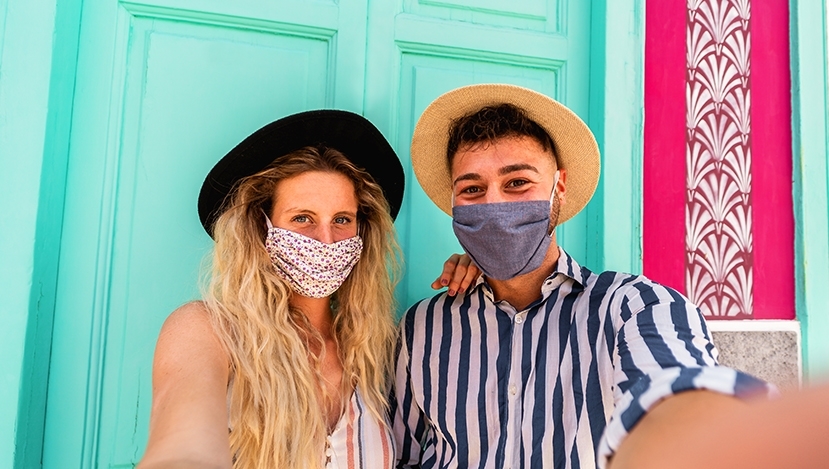 I Will Fly Again

Coronavirus wrought an unprecedented toll on developed countries in 2020. Health systems were strained to the limit, many people were infected, and tragically many died. The pandemic also had an unprecedented effect on businesses, with millions put in lockdown, unable to work. Every industry was hit, but perhaps hardest hit was the aviation industry, with up to 99% of international flights cancelled in some areas during the mid-March to mid-June period.

Now, like the phoenix from the flames, airlines are taking to the skies again and the many millions forced into lockdown can now emerge from their hibernation to avail of trips to their favourite destinations. A huge amount of effort has been made by the aviation industry to make post-COVID flying as safe as possible, yet, understandably some people are still worried.

To allay these fears and to help you with your decisions we have made a list of the “safest” countries in Europe for travel. The list consists of the countries where Coronavirus too the least hold.

The list of reasons for which countries may have had a low COVID-19 impact are various and include government response, lack of land borders and of great interest to travellers, abundant sun. Vitamin D, with is produced in skin epidermis through a chemical reaction dependent on sun exposure, has been shown to have a great impact on the reduction of risk infection and increase the chances of survival against COVID-19.

A good dose of Vitamin sun would be great for all of us, so let’s see which countries travellers should check out in 2020:

Where to Visit in Europe Post-COVID-19

The effect of Coronavirus on Europe has been as diverse as Europe itself. While some countries escaped relatively unscathed, others were badly hit with hardly a person not knowing someone who had contracted the virus.

France, Sweden, Italy, Spain and the UK suffered most with a range of reasons given from mutated viruses to poor governmental responses, however, it will be a long time before we really know.

Here are our recommendations for the Top 10 European Countries for safe post-COVID travel:

At the crossroads of Europe Poland is vast country that offers a little bit of everything from mountain hiking with winter skiing, pristine beaches, history, castles and bisons to ultra-modern cities, all accompanied by great food and drink.

There is a huge selection of cheap flights from the UK to a dozen locations in Poland. Poland offers excellent value for money and also, unexpectedly, hot summers with temperatures regularly rising above 30C.

When people think of the Czech Republic, they automatically think of Prague and it is hard to see why not. Prague is a beautiful city having avoided the devastation that befell other cities during the war.

Czechia, as it is now officially called, is full of history and beauty, forests and mountains. It is also the home of Pilsner beer, which some claim to be the best in the world. Beer is actually cheaper than water in Czech and with a cuisine to match, it is the perfect destination for those who like a little adventure.

Iceland is unique offering a landscape that often looks more lunar than terrestrial. With 20% of the country consisting of national parks and protected areas, it’s no surprise that Icelanders were encouraged to go out and “Hug a Tree” during the Coronavirus pandemic.

Iceland is one of the most actively volcanic countries in the world, with the Mid-Atlantic Ridge splitting the country in two. There are 30 active volcanic systems, of which 13 have erupted since the country was first settled 1,200 years ago.

For those who like to go off the beaten track, Iceland offers a landscape like no other, and for many the experience of a lifetime. There are regular direct flights from several locations in the UK to the capital city Reykjavik.

Jewel of the Adriatic, Croatia has for a long time been associated with sun holidays and pristine beaches. With nearly 6,000 km of coastline, including Croatia’s 1246 islands, there are beaches with plenty of space to suit everyone.

With fantastic food and welcoming people, the EU’s newest member has much to offer. For those interested in city breaks, check out Zagreb, Dubrovnik and Split, with a mixture of ancient charm, perfect weather and that Mediterranean feel.

The European Union’s smallest country is nestled half way between Sicily and North Africa, and this is reflected in its culture and language. Malta will seem unusually “English” to the first time visitor, this is due to Malta being a British possession for 150 years until gaining independence in 1964.

This familiar feeling, combined with beaches, pre-historic UNESCO sites, and perfect weather makes Malta a must for travellers. Regular year round flights are available from the UK from various airlines.

Greece is a country that has it all. Skiing in the mountains, fabulous beaches, enthralling islands, more history than you can shake a stick at, and that’s just for starters. With diverse people, from Thessaloniki in the north, the last city to return to Greece after centuries of Ottoman rule, to Athens, to Crete and another 226 inhabited islands, each with its own history and culture.

Known as the cradle of Western Civilisation, Greece offers unparalleled wonders such as the Acropolis, succulent sea food, the freshest olives and salads, all washed down with bounteous amounts of local Retsina wine. Greek restaurants have been dishing up fabulous foods for thousands of years at unbelievable prices. Book now and relax in the lap of the gods.

Cyprus has been divided between Greece and Turkey since 1974, however opinions aren’t divided when it comes to this unique island. Settled in antiquity, Cyprus has been fought over for millennia. With a commanding position in the Mediterranean Cyprus offers holiday makers sea, sand, sun and a little bit more.

Friendly people, compact size, and endless beaches make Cyprus a must. Whether north or south, both sides of Cyprus will offer the visitor a taste of its diversity. Regular cheap flights from the UK service the 4 hours 30 minute flight to your piece of heaven in the sun.

Little known Montenegro is famous for its mountains and it is from this that it gets its name. The local name Crna Gora, or black mountain, came to English via Italian in the form Montenegro and it is no wonder.

With a mixture of Ottoman and Yugoslavian history, the capital city Podgorica, previously Titograd, is a slow moving city of 200,000, offering excellent food and drinks at friendly prices.

With 50 peaks over 2,000m, scenic mountains cover 80% of the country. If you like beautiful scenery and solitude, you don’t have to go far in Montenegro to get away from it all. Although small, at only 1/10th the size of England, Montenegro has it all and even has 70 kilometres of beaches.

The Eastern part of Czechoslovakia is often considered as the Czech Republic’s poorer brother, however this couldn’t be further than the truth. Slovakia is full of history, culture, beauty and scenery. Famed for its Tatras mountains, Slovakia is a major skiing destination in winter.

Bratislava, Slovakia’s capital is located only 75km away from Vienna and is easily accessible. Archaeological findings have shown that the city has been inhabited for over 7,000 years and when you get there you will see why. It’s beautiful city streets straddle the Danube and it is full of vibrant bars and restaurants.

In the East you can find amazing scenery in the aptly named Slovak Paradise mountain range and national park. With fabulous local foods and beer cheaper than water, it’s no surprise that Slovak’s are considered by many to be much more fun loving and laid back than their Bohemian cousins.

Check out cheap flights to Bratislava in the west or Kosice in the east for the perfect start to your journey.

Europe’s number 1 safest post-COVID country is the mountainous country of Georgia. Bordered by Russia to the north and Turkey, Armenia and Azerbaijan to the south, it is approximately the size of Ireland and boasts some of the best Black sea beaches.

Famous for wine and brandy, as well as its diverse foods, Georgia has become a popular tourist destination in recent years. The capital Tbilisi is one of the few places in the world you can still find a statue of Soviet leader Stalin, who hailed from Georgia, but if you can try to travel further afield to enjoy the beautiful landscape, accommodating locals and fabulous wines.

Georgia is not as well served with flights from the UK as other destinations, but don’t let this deter you. Georgia is blessed with a perfect summer climate, scenic beauty and history, make it a place for you to visit soon.

There’s never been a better time to travel. Great deals can be had on flights and even better deals upon arrival. Many hotels in tourist countries are half price, eager to receive new customers. Shop around and see what’s available from our Top 10 list and have a safe and special 2020 breakaway.

Last chance for Summer 2020 Holidays Summer is drawing to a close, but there is still plenty of opportunity for sun holidays with Cuba now coming off the quarantine list. Other countries such as Switzerland, Czech Republic, and Jamaica have been re-included on the self-quarantine list, while Portugal has been added to the travel corridor…

Now that Europe is back opening up to air travel again, after a 3 month hiatus due to the Coronavirus pandemic, how will flying now change? What new safety precautions can we expect at airports and on board as we take to the skies once more? On 15 & 16 June 2020 most of the…

The Coronavirus pandemic (COVID-19) and closure of borders by the government to minimise spread caused millions of people to have their flights cancelled. These passengers are now out of pocket and are not sure what they can do. GIVT’s experts reply: On 13 May the European Commission confirmed that airlines must refund passengers for flights…

It’s been 3 months since my last flight and my feet were getting very itchy. Luckily lockdown is coming to an end in most of Europe with governments reopening their countries for tourism and normal traffic in stages. After these long weeks of uncertainty, we all need a break, and I’m sure that lots of…

Huge airlines, small tricks, a big problem. Don’t let the airlines bamboozle you out of your money back for a canceled flight. Even during a pandemic, refunds are a basic right for all passengers. Who is affected by this problem? The aviation industry literally came to a halt in March this year and has not…