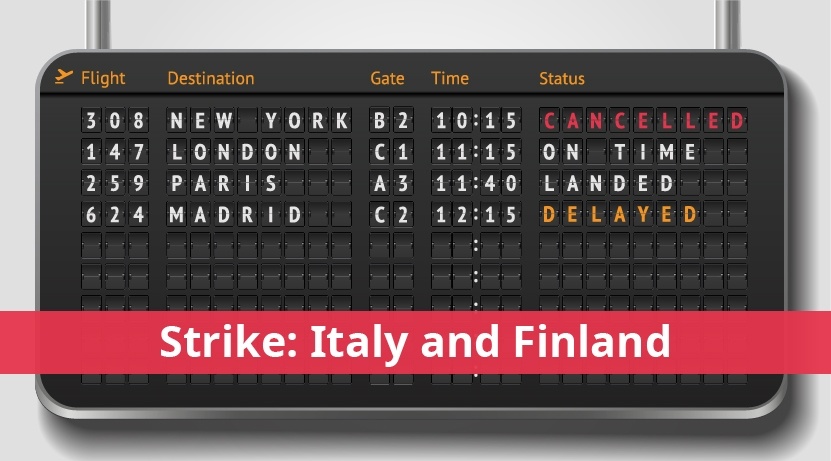 Tens of thousands of passengers will be hit by a double whammy today as hundreds of flights are cancelled or delayed today as air staff go on strike in Italy and Finland.

Staff at Italy’s major air traffic control centres in Rome, Milan, Brindisi, and Padua will strike for 4 hours today, between 1pm and 5pm CET. These centres are responsible for controlling all Italian airspace and extended zones in the Mediterranean.

Supporting their fellow workers air traffic controllers at the following airports are also due to go on strike: Rome Ciampino, Ancona, Brindisi, Perugia, and Pescara.

Worst hit will be Italy’s biggest airline Alitalia at its main hub Rome Fiumicino, and others at Milan Linate.

Finland’s main carrier Finnair will be heavily affected as most flights to and from their base at Helsinki are grounded. Finnair spokesperson Paivyt Tallqvist said on Sunday, “Our current estimate is that we could operate some 120 of our 377 flights scheduled for tomorrow.” (source: Euronews.com)

Any passenger whose flight has been cancelled is entitled to a free rebooking on another different flight as soon as possible. This even includes a seat on a different carrier’s flight.

In the event of a delay, passengers are entitled to food and refreshments and should there be an overnight delay, accommodation at a hotel. Any passenger whose flight arrives over 3 hours delayed at destination may also be entitled to compensation and can check our flight checker for more details.