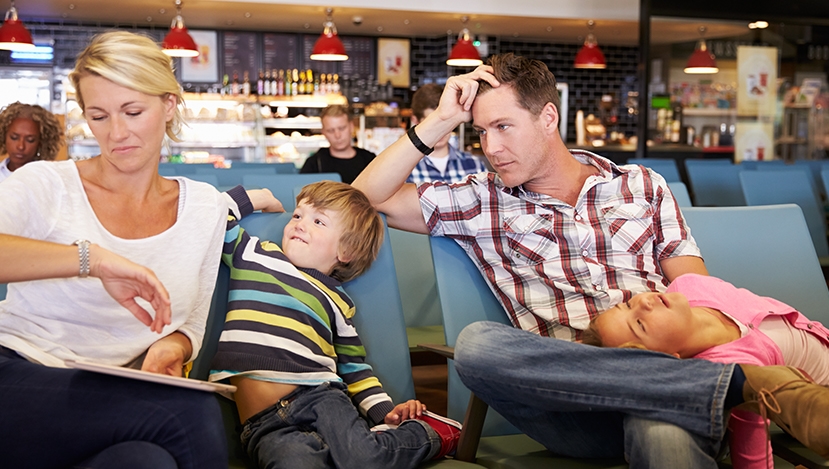 Everyone who has ever seen the dreaded ‘DELAYED’ message appear to their next number immediately starts glancing nervously at the time. If you find yourself in such a situation when flying within the European Union or on a flight registered in an EU country, remember that it’s crucial that you record the delay time of an aircraft as accurately as possible.

What services and compensations you’ll immediately be entitled to depends on how long you’re forced to wait for a flight. Likewise, the overall delay of a flight will affect how much compensation you can claim when you eventually arrive at your destination.

The rights of passengers booked onto flights within the European Union are regulated by Regulation 261/2004 of the European Parliament and Council. According to the guidelines laid out, the obligations of airlines to passengers ultimately depends on the length of a delay and the distance of the flight in question.

The carrier’s margin of error is a delay of 60 minutes. A delay of this magnitude is considered an acceptable inconvenience and passengers are therefore not entitled to claim any compensation in regards to such delays.

If at least 2 hours have passed since the scheduled departure time and you are still in the departure hall, the carrier is obliged to keep you informed about the development of the situation and planned procedures.

In the event of a delay, the carrier is also obliged to “take care of you”. This means providing you with free meals and drinks in the amount appropriate to the waiting time, as well as allowing you to make two free phone calls and send two e-mails.

If the carrier is responsible for the delay and the delay lasts more than 3 hours, you can claim compensation.

You are entitled to money regardless of the distance between the point of departure and the destination airport. However, kilometres do have an impact on the amount of potential compensation, which can range from 250 to 600 euros.

However, merely submitting a compensation claim does not mean that airlines will automatically pay you money. They may well try to contest your claim by claiming, for example, that a flight delayed by 3 hours actually ended concluded ahead of time.

How is it possible? It all depends on how we understand the moment when the flight ends. According to a precedent judgement of the Court of Justice of the EU, the end of a flight marks the moment when the aircraft door opens at the destination airport. It is this final hour that needs to be focused on and compared to the expected arrival time as printed on your ticket.

Your plane was delayed?

Delays of 5 hours or more

When the delay time begins to tick beyond the fifth hour and into further hours of delay, you’re within your rights to withdraw from the contract of purchase and demand a full refund of your ticket price. The carrier is also obliged to provide you with a free trip to your destination on the earliest possible flight.

There are many details that need to be considered in the event of a flight delay. If you are the type of inconvenienced passenger who’d rather not deal with the legal and logistical headache of resolving compensation claims yourself, you can turn to us. Our expert team works on the behalf of clients to analyse their individual circumstances and claim for compensation for flight delays. If your claim is justified, our team will perform all the necessary steps and actions necessary to ensure the appropriate amount of compensation is credited to you as early as possible.

How long was my flight delayed for? Learn how to work out whether you are entitled to compensation from your airline, and how much you are able to claim, based on the length and destination of your flight and how long a delay occurred. Make sure you receive what you are entitled to, as quickly…

Refundable tickets – what it means and how to buy them?

Your plans might change any time affecting the date and time of your flight tickets. Whether it’s a business emergency, travel visa denials, or spontaneous holiday extensions, it’s always helpful to find out a little more about refundable airline tickets. Here are a few helpful notes to keep in mind on your next air travel…