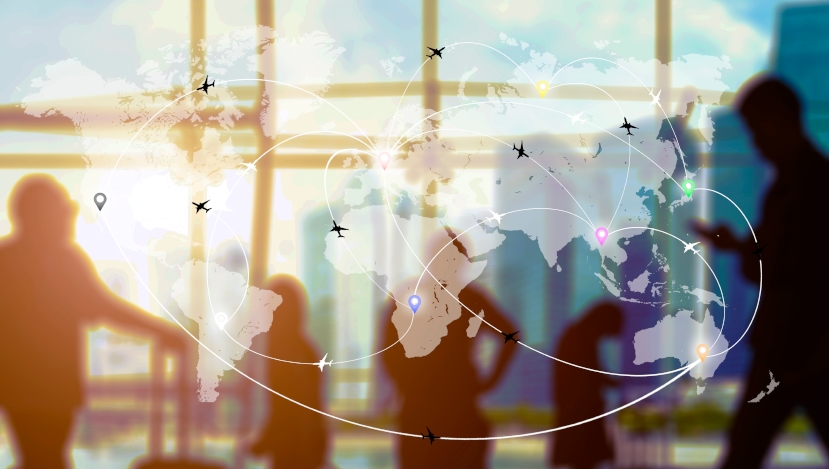 When you’re travelling at 30,000 feet at ¾ the speed of sound, and you know that you’ve already missed your connecting flight, it can be pretty depressing. You know you’re going to be stuck somewhere that you don’t want to be and the chances of making that next flight are getting less by the minute. So, what can you do?

Stuck in the middle of nowhere!

You’ve arrived at your transit airport and your connecting flight is already airborne, what now? What happens next really depends on which type of ticket you have. Do you have a single booking with a multi flight ticket, or separate bookings with separate tickets?

What is a connecting flight?

What ticket type do you have?

If you have a multi-flight ticket, then it is up to the airline to help you. If their first flight arrived late, or not enough time was left to complete the connection, they then are obligated to provide you with an alternate flight or flights to get you to your final destination on time. Usually the crew will know before landing of the impending missed connecting flight and will give instructions, otherwise make your situation known to the airline as soon as possible and they should provide a solution.

Depending on how you booked your flight, the amount of time between connecting flights may vary. If you booked all legs of your trip with the same airline, or one of its partners, the booking will normally automatically allot enough transfer time. However, if you booked two different flights with the same airline, then you should give yourself at least a couple of hours leeway between flights, depending on the size of the transfer airport, and whether checked in luggage will be checked through or not.

Be careful though, separate flights booked with the same airline are not considered as connecting flights under current legislation, and in the event of a missed connecting flight because of delay you may not be eligible for compensation. This is especially true of low cost airlines who do not offer multi-flight tickets.

If you have booked sperate flights, then it really all depends on your airline. Some airlines may try to be helpful and have a schedule of flights to get you to your connecting or final destination free of charge or at a small fee. Other airlines, especially lowcost airlines may be less helpful and you will be left with no redress, the only option being to fork out for another flight. Depending on your airline you may also be able to cancel other flights on your ticket and seek a refund. Check to see if your airline is part of an alliance, e.g. Star Alliance, member airlines are often more willing to accommodate fellow passengers at less onerous fees.

What are you entitled to if you missed your connecting flight?

There are many things that you can do either at the time, or after the fact to claim your rights. Find out who was the flight operator, which airline is actually operated the disrupted flight? Sometimes other airlines operate flights, you will see this on departure boards where sometimes two or three different flight numbers are listed for the same time and destination. This means that each airline sold their own tickets for the flight, but only one of them actually operated the flight.

If your first flight was delayed or cancelled you could be due compensation. You need to ascertain who was operating the flight to know who is liable for your compensation. This should be clearly marked on your boarding pass. It is always advised to keep all your travel documents, including boarding pass, in case of a claim, however a boarding pass is no longer essential when claiming against an airline.

If all your flights were booked on the same ticket, then any compensation due will be calculated on the total distance of all flights and not just the delayed or cancelled first flight. If you had two separate tickets you may be still be entitled to compensation, but only for the initial flight and not any subsequent missed flights.

How much money can you get?

Below are the flight compensation rates stipulated by Regulation (EU) No 261/2004. The amounts are due to each passenger regardless of age, purpose of trip, or ticket purchaser.

What information do you need to know?

Very important! If there is any kind of flight disturbance always ask an airline representative, why the flight was delayed or cancelled. Once it is clear that the fault lies with the airline and your flight is delayed by 3 or more hours on landing, EVEN if you successfully made your connecting flight, you are entitled to compensation. This is not the case if the delay is caused by extraordinary circumstancessuch as bad weather, or a strike by airport staff, e.g. air traffic controllers, or baggage handlers, and not airline staff.

Can I get a ticket refund?

If your first flight was cancelled on the due to technical problems, etc., then you may be eligible for a ticket refund as well as compensation. Contact your ticket seller for more information.

What other rights do you have?

As with any delayed flight airlines owe you a duty of care. You are entitled to food and refreshments. You are also entitled to an alternate flight to your destination, or in the case of an overnight delay, transport to and from a hotel plus accommodation.

What about my luggage?

If you booked your flights with the same airline your baggage should be checked through automatically and may arrive at your final destination before you, or even on the same airplane you were meant to travel! Inform airline staff in If for any reason you decide to cancel your follow on flight contact your airline to see if your baggage can be removed or sent to a different destination.

My first flight was over 3 hours late because of the airline and I only finally got to my destination 8 hours late?

You are owed compensation, the amount of which may vary depending on whether you have one or two separate bookings. You can enter the details into our flight checker and we will be happy to do the rest. Don’t forget that anyone else who was on the same ticket as you can claim too. Sometimes compensation can be even more than the cost of the ticket, so it pays to act now and check your claim.

There are many reasons why you may have a missed connecting flight. It might have been due to bad weather, or the airline had a technical problem and the plane was delayed. Maybe there was an air traffic control problem with geese? Or perhaps you just arrived too late. Whatever the reason the first plane was delayed, you missed the connecting flight and may be due compensation.

It can get pretty complicated trying to work out whether you are eligible for flight compensation, a list of main reasons can be found in the tables below:

Airlines from several countries have confirmed that they are suspending flights to China over fears of the coronavirus outbreak. All passengers flight to, from or via China are urged to check their carrier’s websites for update details. Air Astsna – Kazakhstan Air Canada – Canada Air India – India Austrian Airlines – Austria Azerbaijan Airlines…

Strikes to continue in 2020 Members of ENAV, the national air traffic operator, have announced a 24 hour national strike on the 14th of January, extending to 48 hours in Liguria, including Genoa, La Spezia, Savona, Imperia. Strikes by Air Italy and Alitalia have also been announced for the same day at the following airports…