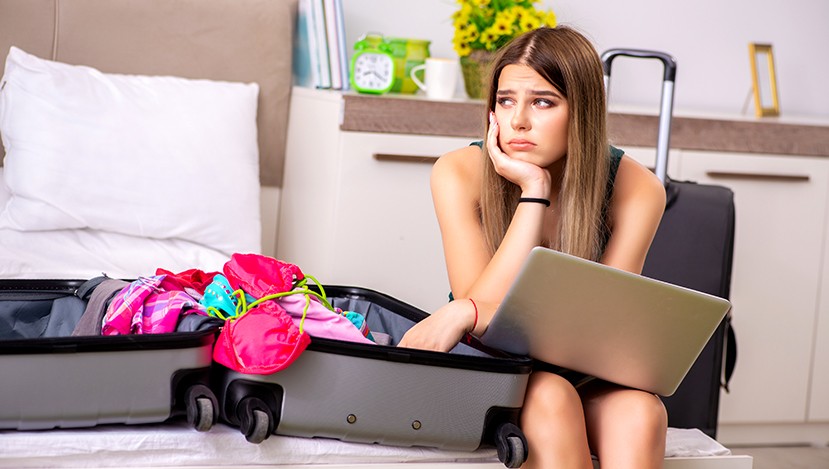 Flight prices offered by travel agencies are tempting to anyone who’d like to spend their dream vacations in the paradise destination of their choice. This is mainly because they offer comprehensive holiday packages, including flight to and from the destination. But what when we’ve been waiting to take off for several hours or, worse yet, our flight has been cancelled?

Check why the flight was cancelled

Passengers are quick to blame the travel agency. No wonder, since that’s who sold us the ticket and who notified us of the cancellation. Yet the agency is not always at fault. First of all, we should find out who cancelled our flight. Was is really the travel agency, or maybe the carrier? In such cases, it is best to contact the company that organized our holiday and then the airline. Once we know who is responsible we can take appropriate steps.

‘In situations like this we should take a look at our contract with the travel agency, because some of them have clauses specifying when they will give the flight number or the hour of the flight to passengers,’ says Claim Assessment Team Leader, Aneta Budzeń. ‘In reality, buying a holiday trip from a travel agency is not tantamount to buying flight tickets. This is something that the intermediaries do later, often at the latest possible moment, as they are after best available offers. For this reason, if a passenger is notified two days before departure that the planned flight time or the flight number has been changed, they should not automatically assume that the flight has been cancelled by the airline and pursue claims against the carrier ,’ she adds.

If a flight ticket has been purchased, the airline may be responsible for the cancellation of the flight. Said “fault” here could be an airline staff strike (whether legal or not), for which the given carrier is responsible, cancellation due to bad weather conditions preventing the take off or landing of the plane, or a faulty aircraft. In this event, passengers may be entitled to a compensation of up to €600 per person, even if they purchased the flight ticket through a travel agency. Its amount depends on the flight distance and route and the airline’s country of registration. This is because such purchase took place based on an agency contract (which involves searching for potential customers, presenting the offer to them, informing them of contract terms and conditions and their negotiation), which is made between the travel agency and a specific air carrier. In such a situation, the responsibility clearly lies with the carrier, so the immediate action we should take is to send a complaint to the airline. How quickly we must act is determined by the statute of limitations for compensation claims in the given country. For example Polish law stipulates a one-year limitation period, which means that we have only this much time to pursue our rights in connection with a cancelled trip. This is not much; in reality, this is one of the shortest time limits in comparison with, for example, Hungarian law.

It must also be kept in mind that compensation may be granted only if the cancellation took place no earlier than two weeks prior to the planned flight (it does not matter whether we received this information by mail, e-mail, on the phone, or at the airport). If the carrier has sent us this information15 days in advance of the flight, we will not be entitled to any compensation.

You will find detailed information on rights, the amount of compensation (250, 400 or 600 €) depending on the length of the trip and the statute of limitations of the claim, as well as others, such as reimbursement of the purchase price of the ticket in our passenger rights.

Get your ticket refund

What to do when your flight is cancelled?

Always hold onto your travel documents confirming you were ready to travel. These are:

Why these documents? Because they provide information that will be important when you pursue compensation claims, such as passenger particulars, flight number and the time of the planned flight.

Moreover, we recommended that you check which airline operated the flight, and its route. All this information will make it easier to verify whether you stand a chance of getting any compensation at all from the carrier.

You should also try to get all the information you can regarding the reason for cancellation and find out what kind of care you are entitled to. The most important elements are:

Cancellation of a flight at the fault of the travel agency

The legal basis for seeking compensation in the event of cancellation of a flight by a travel agent, even though the airline did operate the flight, is Article 5(1) read in conjunction with Article 7 of Directive 90/314/EEC.

‘If you lose only one day of the trip, you are entitled to a refund for one day, calculated in proportion to the total cost of the trip. In such events, you should submit your complaint directly to the travel agency. Nevertheless, courts in some countries apply the Frankfurt Table (Frankfurt Card), which determines the amount of compensation in the event of improper performance of the contract for the provision of tourist services by a travel agency, so the situation will not always look like this,’ explains Emilia Żuchowska, legal adviser at GIVT. One example comes from Poland. Clients of a travel agency received PLN 3000 as compensation for a day spent in conditions other than those planned, despite the fact that the total cost for their 14-day stay at a 4-star hotel in Greece was PLN 7708. Thus, the refund they received was proportionally quite high.

Compensation for material and non-material damage

How to check if flights on 22 and 23 August will be cancelled due to Ryanair pilot strikes?

British and Irish pilots working for Ryanair have declared a 48-hour strike to take place on 22 and 23 August. This means that the flights for around 500 000 passengers (with confirmed reservations) operated by this carrier on these days could be at risk. In short… cancelled. Will the strike actually take place? There is a…

Travelling can be liberating, inspiring, and help you recharge your batteries. As a traveller, you probably invest a great deal of time and money planning and booking your trip, so it’s understandable that you may be disappointed if your flight is cancelled. Unfortunately, flight cancellations are quite common: there can be more than 2,000 flight…