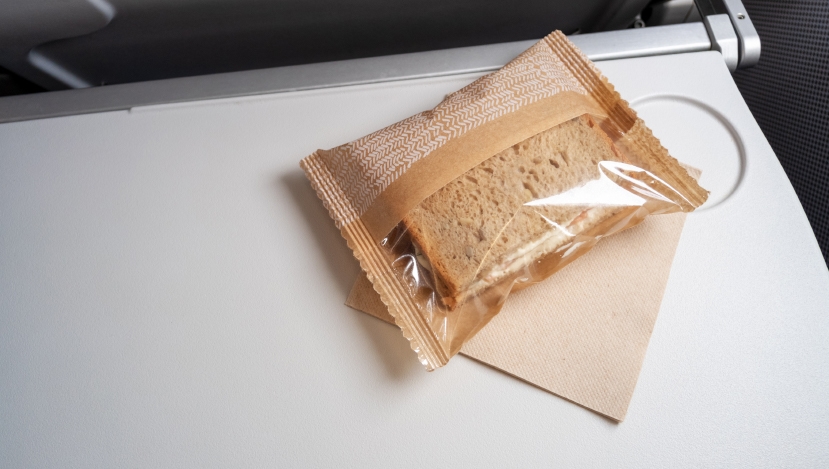 With all the restrictions on security at airports sometimes it’s hard to know exactly what foodstuffs you can bring on a plane. In general, you can bring anything that is not on the list of banned items onboard your flight nor anything controlled or illegal in the country of depart or arrival.

Is there are a difference between the foods I can put in checked luggage and hand luggage?

Can you take food on a plane in hand luggage? And can you take food on a plane in your suitcase? In general, there are few restrictions on foods and drinks you can pack in your checked luggage once they do not contravene any laws. Private citizens travelling through the EU have a no questions allowance limit of 10 litres of spirits, 90 litres of wine and 110 litres of beer per person across borders, but it is hard to think that anyone would pack more than this in their checked in luggage!

Any items that have been purchased in the airport after passing security can safely be brought onto your flight, assuming that their bulk complies with airline hand luggage rules. By that measure airport security is really the only barrier to what you can consume on planes.

Here is a handy guide to what food can you take on a plane in your hand luggage:

What if I get thirsty?

If you want to hold on to your money for a cold beer in the sun, or some gorgeous holiday food, what should you do? Firstly, passengers are entitled to bring up to 1 litre of liquids onboard flights in hand luggage, providing they are bottled in 100ml containers. This liquid can be shampoo or toiletries or equally can be water or a little something to drink mid-flight.

What baby food can you take on a plane?

Baby food can of course be taken on planes but is subject to the same limitations as other foods and liquids. Formula or pre-pumped breast milk can be brought on board in hand luggage once it adheres to the 100ml rule. Similarly, puréed baby food in jars or packets and smoothies all classify as liquids and must be in quantities of 100ml or less.

What do the airlines say, can you take your own food on a plane?

Bringing your own food onboard is your right, some airlines are quite upfront about this and even acknowledge this on their websites. Here’s what they have to say:

“You may bring your own food onboard if you follow the safety regulations regarding carry-on bags. Please keep in mind that there may be travellers with allergies on the flight. We kindly ask you not to bring or eat peanuts onboard, for example.” ( Source: https://www.flysas.com/)

Ryanair says with a caveat:

“You are welcome to bring your own food onboard, however, in the interest of safety, hot drinks can’t be carried onboard.” (Source: https://www.express.co.uk/)

“Yes, you can bring your own food and beverages onboard.” (Source: https://www.express.co.uk/)

“All passengers are allowed to bring food onboard with them in their hand luggage. Drinks may be brought onboard but they must be bought after the security gate.” (Source: https://www.express.co.uk/)

The rules aren’t very clear, what exactly is a liquid?

This may seem silly but knowing what constitutes a liquid is very important when passing through airport security. For security purposes anything that can be spread or poured is considered a liquid.

Examples of “airport” liquids are:

Can you take homemade food on a plane?

Making your own sandwiches in not a problem, but you shouldn’t arrive on the plane with a full McDonald’s Happy Meal. Any homemade sandwiches that contain any of these spreads are usually exempt from scrutiny, but it is a bit of a grey area.

Can you take tinned food on a plane?

Tinned goods are another grey area, tinned fish, tinned fruit and vegetables all contain a certain amount of liquid content. These may be confiscated at security, so it is best to pack them in checked luggage or buy them at the airport if possible.

Even though fruit such as watermelon, melon, strawberries, pineapple, oranges, raspberries, and vegetables such as cucumbers, iceberg lettuce, celery, green peppers, and spinach contain over 90% water, they are still considered as solids.

What food and drink can you take on a plane?

Weirdly, ice or ice packs are not considered as liquids! If frozen at security, they do not pose a problem but if thawed they will be confiscated! This oddity also applies to foods like ice cream, ice lollies, etc.

“Packing food and drinks in checked luggage isn’t really a problem. The problem is knowing what is a liquid at airport security. Things like Marmite and Nutella are considered liquids so you won’t get through with them, you should pack them in your checked luggage.”

Why is there such a big deal about in flight food?

In flight food is big business, ancillary revenue is a major source of income for airlines. It can even mean the difference between a profit or loss for a carrier at the end of the year. Ancillary revenue is manifold and comprises many areas such as à la carte, frequent flyer and advertising.

Airlines want to squeeze out every penny

À la carte comprises all the optional extras that passengers can opt for when travelling. These range from baggage charges, preferential boarding, seat preference, credit card fees, call centre fees to, of course, onboard sales of food and beverages.

Revenues converted from US$, source IdeaWorksCompany

Ancillary revenue is a bigger source of income for European airlines than American with more dominance by lowcost airlines. It is perhaps no surprise that Ireland’s Ryanair is the king of ancillary charges. Ancillary charges allow airlines to reduce the cost of their tickets and lower ticket costs mean more sales, it’s a simple as that. It is then up to passengers themselves to opt for, or not, the extra offered services.

Every little makes a big difference

When we go to the airport we are often faced with a veritable obstacle course of domestic and multinational shops vying for our money. At the airport everything must go but nearly everything is for sale at elevated prices. Our first thought is that we’re being ripped off, but the truth is that concession costs at airports are very high and are often charged at a percentage of income. Extra costs associated with security and elevated wages often force retailers to charge twice or three times street prices just to be able to turn a profit.

“They don’t give us realistic sales targets. That is why on a 75-minute flight we might have three trolley services plus the gift cart plus the scratch cards.”

When we do finally manage to make it onboard our flight we are almost hustled into purchasing more drinks and snacks at hugely elevated prices. The costs of drinks and snacks can vary hugely too. A sample price comparison for a sandwich, snack, and water on six European airlines, including three lowcost carriers, showed Ryanair as being 57% more expensive than the cheapest Lot – Polish Airlines.

Prices in local currency have been converted to Euro and rounded. Source: Airline websites.

Ryanair has over 2,000 flights a day, if they only sell an average of 5 bottles of water per flight at €3 each that makes an incredible €11 million per year! It’s the same for sandwiches, crisps, chocolate, coffee, tea, you name it. Once it sells it’s worth millions. And it’s not just lowcost airlines, both Air France/KLM and Lufthansa rake in over €1.5 billion per year in ancillary sales.